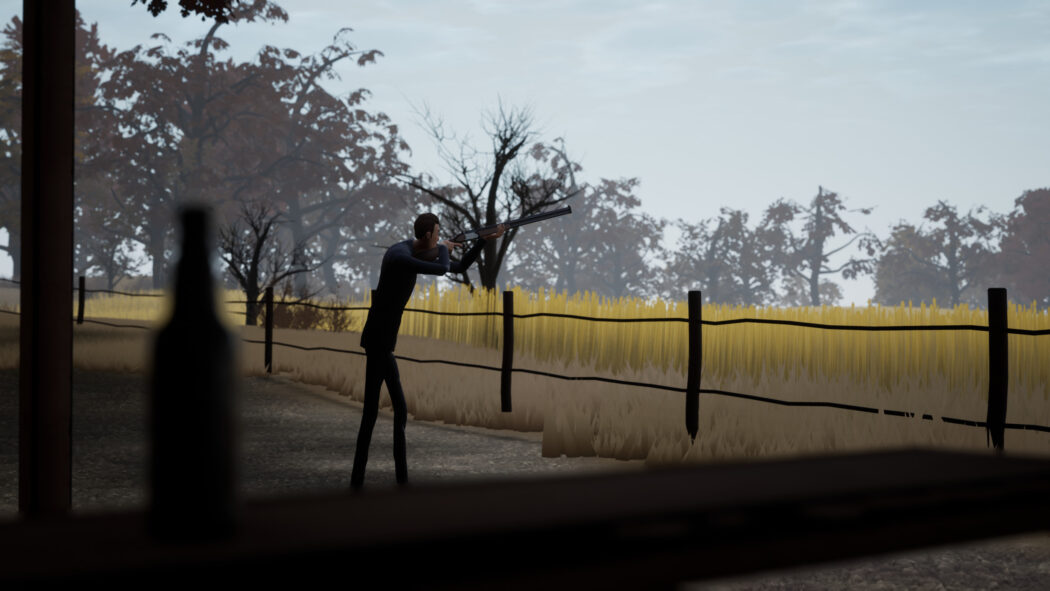 Growing up in the midwest, I feel pretty qualified to say I’ve never played a game about middle America in the way that Adios is about middle America. The debut game from Mischief is the story of a Kansan pig farmer who decides to stop working with the mob. The game was written and directed by studio founder Doc Burford, who previously wrote the short horror indie Paratopic. Inspired by Burford’s life in Kansas, the end result is a deeply personal and meditative first-person adventure game that is poignant and ambitious, if not a bit unpolished on consoles.

You are the old pig farmer. The pig farmer gets rid of bodies for the mob. He’s been doing it for decades. But today is his last day. What follows is a series of conversations between him and his long-time associate, who will do what has to be done when one retires from this line of work.

The game begins sometime in the ‘90s, with the farmer feeding his pigs, finally making up his mind that this will be the last time. Adios embraces the methodical mundanity of farm life and finds meaning in it. As you do menial tasks ranging from eating eggs to shovelling manure, the two try to talk each other out of the inevitable. They aren’t super involved and often aren’t required to move the game forward. Like Paratopic, Adios utilizes smash cuts to keep the narrative momentum going throughout, resulting in a game that feels largely ambivalent towards the player.

The voice acting is a highlight of the game. Not just the quality of the characterization and performances from the actors, but the way it all flows. There is no awkward waiting between lines of dialogue, no jilted reactions. Getting this right is crucial to the success of a game where you sometimes just spend a scene poking around a room listening to the characters talk.

The game also includes dialogue choices, but they aren’t meant to branch the story; instead, they illustrate the lack of agency both characters have. Like other narrative indies — Kentucky Route Zero, for example — the choices show the interiority of the character, each option giving a little more insight into the farmer’s mind. Once again, though, this is the point.

When I said up top that Adios is about the midwest, I was talking about the farmer. He is at his heart a man guided by faith, trying to repent and do the right thing. He lives with his regret, and he dies with it. By the end of the game, he reminded me more of people I’ve known than any character I’ve met in a game before.

THE MIDDLE OF NOWHERE

The setting is as much of Adios’s identity as the story. Looking past the farmhouse is flat land and trees extending to, seemingly, infinity. Power lines reign tall like skyscrapers over the browns, yellows, and reds of the game’s palette.

As the scenes play out and you see more of the farm and the house, you learn there is history there. He misses his wife’s cooking. He regrets alienating his son Bill, now a grown adult. It’s easy to see his time-consuming hobbies like fixing soda machines and working on old cars as his coping mechanism. The scenes play out, and often the player doesn’t even have a whole lot to do. Adios is not a game about solving problems or coming to terms. Adios is a game about waking up and realizing there are some things you will never get a chance to come to terms with.

Unfortunately, this recommendation comes with a caveat for console players. The game is fairly buggy. I reviewed the game on an older Xbox model, so these issues may not be present on a Series X. While a majority of these were minor technical glitches that weren’t an obstacle to immersion or progress, the most egregious of these bugs led to an admittedly hilarious scene of a man milking an invisible goat.

Thankfully the slow, narrative focus of Adios means these issues shouldn’t get in the way of what matters; the thoughtful story and the melancholy atmosphere. If you want a refreshing perspective on the kinds of stories games can tell and how they tell them, Adios is well worth your time.